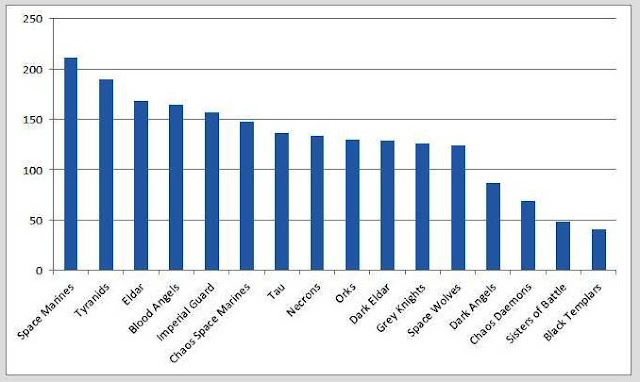 Credit: 3++ Armies Played Poll Analysis
﻿
There we are, #4 on that list. However, Space Marines is the catch-all beginning player army that represents more chapters than any other codex generally. I am quite surprised to see Eldar doing so strongly, but that may be due to 4th Edition popularity and people didn't want to part with their lovingly painted models. The Blood Angels' twin from second edition, Dark Angels, are far behind in popularity yet may shoot up again once their new codex drops shortly and through new players buying the starter pack (well played, GW). ﻿I'm not going to lie and say I'm not shocked to see Tau ahead of Orks, but maybe Ork players are more dedicated to them and play them more as a main army.
I've read before that the Blood Angels are the most popular single chapter of the Adeptus Astartes. Having a red army helps, but I think there is something about having Assault Squads as troops and Death Company that really drives interest in this chapter along with a focus on close combat. We can all imagine hurtling ourselves through the air with our jump packs to come crashing down with Thunder Hammer to smash our opponent or Lightning Claws to rip them to shreds. Every army needs some fire support though, and Devastators are an excellent choice to neutralize threats. Jumpers and Devastators make a fun combination to play on the table and interesting to customize and paint.
Posted by brent at 4:07 PM No comments:

After creating the useful Captain in the Space Marines codex, Mat Ward took most of the useful upgrades away from the Blood Angels Captain. This included increasing the points cost of the Storm Shield, no Relic Blade, no Artificer armour and doesn't make marine bikes scoring if the Captain has one. This is a significant downgrade of the Captain and doesn't make him very useful to lead your army. This is important because there isn't much customization available on the other characters or none at all. I don't think opponents want to see only Librarians, Dante or Mephiston across from them every time they play Blood Angels. 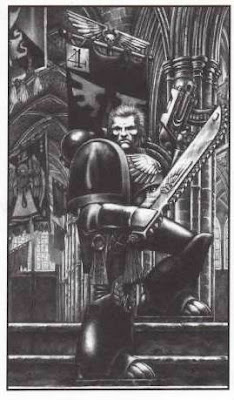 He doesn't really have that much going for him with the amount of powerful characters in the game.


I did an entire article on the Odd Man Out himself the Blood Angels Captain, and how he really doesn't have a true place in the codex. I really did hope for 6th to change that, and while it certainly helped him, it also made him even further overshadowed by his Codex: Space Marine brethren.

When we look at the Blood Angels Captain we see that he can't take any fancy Relic Blades, no Artificer Armor, just knockoffs of that gear... And then we look at the Reclusiarch and he is just overshadowed completely. Hell, even now Tycho is overshadowing him! But that is not to say he does not have his merits... You can put him on a Bike, give him a Power Fist and Storm Shield and have him go hunting Characters (except Codex: Space Marines does it better). You can center him in with some Honor Guard and give the unit a bigger punch (except a Reclusiarch does it better). You can just ignore him and take a Space Marine Captain and a unit of Sniper Scouts and get Bikes as Troops or a 2+/3++ Relic Blade.... And... ...Hell, that's just better, isn't it?

I really feel bad here, I like Captains, I do, but our Blood Angel's ones just fall short of what they could be... And it's just a few small wargear complaints really, but its ones that our Codex: Space Marine brothers don't have and thus, don't have to deal with. Sadly, I feel that while the Captain did get better this edition, another rule (allies) completely mitigates those facts and sends him right back into obscurity.

3++:
-Captains still lolbad. Worse off than other Captains due to having no access to 2+ saves.

BA Devastators:
I think the best use of a Captain is if you want to be able to insert yourself into the game as the leader of your force. Maybe you want to have that jump pack and dual Lightning Claws or maybe hard hitting Thunker Hammer. However, why not do that as a Sergeant instead or as part of the Honour Guard or Sanguinary Guard- even Death Company.

Gabriel Seth is definitely one of the over-looked named characters in the Blood Angels codex. Even though this is the first time he's been someone you can take, being part of the Flesh Tearers instead of just the more generic Blood Angels really hurts him seeing the table more often. He doesn't seem to have a place that fits in a way with the rest of the army unless it's a Flesh Tearers dedicated one. GW has continued support for the Flesh Tearers with even their shoulder pads going into Finecast as opposed to oblivion. Maybe the Flesh Tearers are more popular in England, hence the continued commitment to them. For the next codex, I would like to see more moderate yet somewhat unique characters like Seth to be able to take rather than 250 point characters. Characters like Seth are good for the game in that they can be torrented down, he can shoot, but is stronger in hand-to-hand, so he has some strengths and weaknesses but not extreme. I would just like to see more options like being able to take a jump pack or upgrade his weapons or change to Artificer armour, etc.

The Flesh Tearers are not of Baal origin. Their home planet is Cretacia. 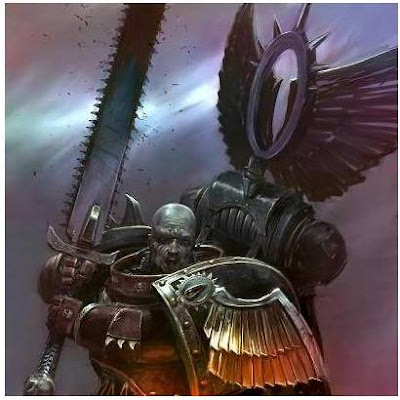 Let's get to his statline- WS6  T4  W4  I5  A4 and a 3+ 4++ save. While ferocious instincts is of limited use, the Whirlwind of Gore is a nice choice to have against vehicles and tough to hurt characters for a more modest point cost of 160 versus 250+ for some of the other big stick named characters.


Mmm, I really didn't want to talk about Seth, but I suppose if I make an all-inclusive list I have to, don't I? I've never really liked Seth, and this edition didn't change that. Sure, it upped his survivability, as it did with every other character, but other than that he really didn't change much... Sure, his weapon now had a bit more of a bite against vehicles, but he shouldn't be focusing on those.... And to top that off there is still the matter of his Lash Out ability, which states that if an attack directed at him rolls a 1 he gets to strike back... ...Except now you never "direct attacks" at a character, except in a Challenge... So by current wording that ability took a hit as well. What else is there to say? I'm not a fan of this character and I think, for the points, you're better off going with a generic HQ or Tycho.

Is that review short? Yes, but you know what they say if you can't say anything nice about someone...

Seth. Whirlwind got nerfed due to pile-in moves. No, he can’t hurt flyers because he can’t assault them.

This guy has been basically unaffected by the new edition. However he has probably gone up in ranking among the characters in the codex. Strength 8 rending causing instant death to any toughness 4 or less I can see as being kind of a big deal, considering how hard 2+ saves are going to be to bypass. Definitely making people think twice about challenging him and allowing him to worry both characters and vehicles in combat. Still a very solid choice and relatively cheap to boot!

BA Devastators: With 6th and vehicles being able to be hit more easily in assault along with challenges, Seth is left looking on the outside until an update. At least he is somewhat unique for a marine character in his powers although not in his statline.
Posted by brent at 3:02 PM 3 comments:

Blood Angels and the FAQ

It's disappointing, but it is expected. Blood Angels will pretty much have to get worse to get better (the next codex). Once the codex has a few years, it gets left behind in power and GW support and rulings. This is clearly one of those frustrating times where things go against your army.

BA FAQ Link
Dante and Astorath have now lost their initiative with their AP2 axes. Point adjustments aren't made through the FAQ's so your models may gain a fine layer of dust for a little while. At least there is no need for trying to figure out what they are fighting with along with the Sanguinary Guard. The other good news is that there is still model support coming out with somewhat fine cast models replacing some metal models:
New Releases Link
The Sanguinor
Sang Priest
Mephiston
Lemartes
Seth
Corbulo
Tycho
Vanguard Vet
BA shoulder pads
Sternguard equipment
meltaguns
plasmaguns
lightning claws
thunder hammers and storm shields

At least your army can look great, right? Corbulo and Lemartes would be nice additions to have, though. 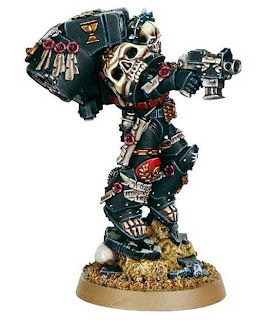