Blood Angel players, I know things may not all be as you wish. However, our codex has not looked this good since 5th Edition April 2010. I had got my Assault on Black Reach starter box, and I was looking around for which space marine chapter to choose. I narrowed it down to either Ultras or Blood Angels. I read the Blood Angels codex, and it was an easy choice with how awesome they are in the stories and units. Then, a year-and-a-half later Grey Knights were released and screwed up 5th Edition. June 2012, 6th Edition arrived which really hurt the Blood Angels with larger overall rule changes. The worst of those changes was the ending of null deployment. May 2014 brought us to 7th Edition quickly and new hopes which were quickly quelled. We only had to wait until December 2014 to get the 7th Edition codex and lots of goodies in the Shield of Baal supplement. These were mostly cosmetic changes and showed that the design studio didn't really know what Blood Angels players really wanted. The Red Thirst codex update really feels like they started to listen to players and what they want. Obviously, no one gets every little thing they could wishlist. I really think we should have Landspeeder Storms, but at least we have been brought more in line with other marines and the design studio knowing that something needed to be done.
Posted by brent at 7:44 AM 4 comments:

One disappointment after another...


Do not lose heart, Blood Angel brothers. Although we have received next to nothing from GW lately (the new psychic powers notwithstanding), do not shelve your army. Instead, take 10-20 minutes and write GW a well thought out email and tell them what you want. Send it off to Gamefaqs@gwplc.com. If you write a letter, they might forward it but will still tell you to email them.
Posted by brent at 1:26 PM No comments: 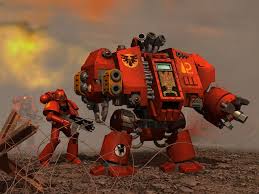 Hot or Not Troops

Rawdogger, from Frontline Gaming and Blood Angels player has been running a Hot or Not set of articles for the blood angels. Give them a click through.

Tactical Marines (hot), Scouts (not), RH1N0 (hot): Tacticals seem superior to scouts. The scouts in the Marine codex almost seem too good compared to Tacticals. The heavy flamer synergizes with putting them in a Rhino, but it seems odd for Blood Angels to being doing drive-bys. Your army should be formed by a core of Tactical marines, so you better get good at using them to their full potential while your enemy is focusing in on your killy units. Don't just min/max these guys. Name them and put them in dedicated squads and get used to their epic battles against most forces that will cause epic casualties.

It's probably not a bad idea to always throw a unit of scouts in with your army to harass the enemy and keep them off-balance as needed. Despite being BS and WS 3, they will usually get the job done.

Last, being a Blood Angel isn't all bad in that you get vehicles that don't sloth along. The Rhino can really draw some attention when you drive it straight at your opponent (thus becoming a feeder unit drawing fire from more important things). If an opponent ignores it, drive it to an objective until needed.
Posted by brent at 8:00 AM No comments:

We are now over two years into this book, and it has proven to be a fairly large disappointment. I am left wondering how long until we will be looking at a new book.

I was correct in wondering whether there wasn't going to be a 6th edition codex. I feel firm in my conclusion that there needs to be an advocate for Blood Angels in the design studio.

The Fourth Company Librarium has run an article on the Blood Angels Codex needs here.

4th Company splits the issues into datasheets vs. detachments/formations.

Blood Angels have gone through a very difficult time similar to Dark Angels where everyone gets your items and others have some things point reduced in comparison. 4th Company lists issues with Terminators, Vanguard, Scouts, Dreadnoughts and Tank squadron issues. I would also tack on that bizarre situation where we cannot take the Land Speeder Storm and Stormtalon Gunship.

There is also the issue of Devastators not being able to use grav-cannons and Assault squads Eviscerators. I have written to GW about this with no response, unfortunately.

4th Company also has concerns about anti-air, I would tend to agree about getting access to Hunters, Stalkers plus the aforementioned Stormtalon. I would have to disagree about giving the Baal Predator Skyfire as it doesn't make much sense based on the weaponry that is more short ranged against infantry.

I understand that there needs to be some distinctiveness between the codices. I like how the Dreadnoughts are different or no access to certain items but not at the cost of leaving massive weaknesses or just not being able to use all of the weapons in basic kits like Devastators or Assault squads. Further, why are Blood Angel Tactical marines allowed to use a heavy flamer but not Space Marines (especially Salamanders)? It makes no sense other than that the Blood Angels Tactical squad comes with a heavy flamer in the box because the sculptors decided to do it.

These are pretty simple and basic things that should never have happened in the first place to the BA codex. Why did GW need to rankle the BA players by actively annoying/ignoring them.

4th Company is looking to bring the BA up to date with the Space Marine Gladius or the Armoured Task Force for example. Additionally, they look to build off of the existing formations to make them viable.
Posted by brent at 9:45 AM 2 comments: