"Drink deep of victory and remember the fallen."
-Inscription over the archway leading to the Sepulchre of Heroes on Baal Secondus

This post will review the historical entries of the current Blood Angel Vanguard Veterans.  Let's go back to their first mention in the Rick Priestly and Jervis Johnson created Angels of Death Codex (I guess it will be the Dark Angels' turn in the sun now after too much time in the chambers with the Interrogator Chaplains.) "The members of the Blood Angels 1st Company fight as assault troops when not equipped as Terminators" (p. 48). Here they are labelled as a Veteran Assault Squad. Also in the entry "A single Battle squad of Blood Angels Veterans forms the personal honour guard of the Chapter's commander" (p.48) Interestingly they could split the purchasing of jump packs between combat squads that meant you could take 10 and have five of them with jump packs and five without if you wanted. The stat line had them at weapon skill 5, ballistic skill 5 and initiative 5. I would sure like to see that come back because veterans should be able to take down a regular marine more easily than just having an extra attack. It would also add some more difference between them rather than simply an extra attack and additional war gear options (Why bother? I guess it's just another thing to blame Gav Thorpe for then in the 3rd Edition BA codex.).

Codex: Blood Angels (3rd Edition) had the Veteran Assault squad moving from the now defunct Squads section to the Elites section. Unfortunately, they also dropped their WS, BS and I back to 4. They also had limitations put on the amount of Wargear they could take "Even amongst these supreme fighters, there are those whose martial skills put them above their battle-brothers.These remarkable individuals are accepted into the First Company and form hard-hitting shock squads that can tear the heart out of an enemy army." Well, I guess they used to be like that but dropping the stats sure knocks the wind out of that quote.

Codex: Blood Angels (4th Edition) by Jervis Johnson still had the Veteran Assault squad in the elites section which look very similar to what the excellent Assault squad is in the 5th Edition Blood Angels codex. They already had jump packs attached but could take them off for a free transport. They kept the same stat line they had in the 3rd Edition codex.

Last, we come to Ward's 5th Edition version of Codex: Blood Angels. They have now changed their name to Vanguard Veterans and moved them to the fast attack slot (in line with the previously made Codex: Space Marines). They lost some options for shooting weapons but gained more close combat ones. They also gained the Heroic Intervention rule as the space marine codex but combined with the Descent of Angels rule made it somewhat more powerful. Although they are better than their Codex: Space Marine brethren, they still suffer from being over-costed in comparison to the scoring unit of the Assault squad. Let's hope for the next codex that they will be given a stat boost or more special rules to make them exciting choices to take.


The Elites section of the Blood Angels book was a real favorite in 5th Edition with more nice units than you can take in the slot. You have single models like: Chaplains, Furioso Dreadnoughts, Furioso Librarians, Techmarines, Sanguinary Priests and Corbulo.  Then there are interesting units like Sternguard Veteran Squads,  Sanguinary Guard, Terminator Squad and Terminator Assault Squad. 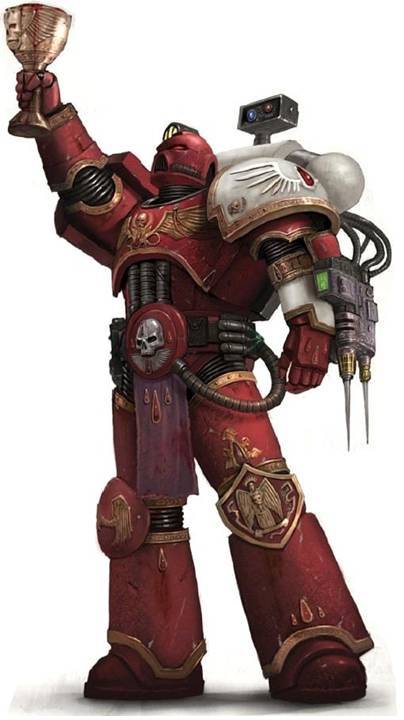 The Elites section has now taken a hit in 6th Edition. The Sanguinary Priest's Furious Charge bonus lost its +1 Initiative and the Feel No Pain rule has been modified (though arguably better). Lightning Claws becoming AP3 took a hit too which means that Lightning Claw Terminators are now a much less viable option than they were. This is quite unfortunate due to how awesome they look as a model and on the table. Blood Angel players should now weigh the importance of their Elites choices versus the scoring possibilities in some missions of the Fast Attack and Heavy sections.Essentially, the Elites section is the only one in the book (other than Death Company, Honour Guard and second HQ choices) that can never possibly score objectives. Have you been treating the above as you do your Elite choices? Maybe not.

Why take them is a legitimate question to explore.

Chaplains, in addition to their own stat line abilities allows re-rolls to hit on the charge. You really want them though for beefing up your small Death Company Squad though because of the extra re-rolls to wound he gives only them. You may consider just using Lemartes anyway though.

The change in the Deep Strike table has made it more friendly for Terminators to drop in. You will want a priest around to get invulnerable re-rolls on those plasma shots they will end up taking or focused firing volume of shots. You might consider taking one Lightning Claw Terminator for manipulating where he will charge into combat or even as the Sergeant for precision attacks to try to take out AP 2 piercing weapons before they can strike at your squad.

Corbulo is a real nice character to have right now with that fantastic 2+ Feel No Pain save of his. He's flexible where you can attach him to any unit that needs toughening up. This might be Sternguard Veterans or maybe an Assault Squad in a Razorback you want to send to claim an enemy objective. Also, a Sanguinary Priest on a bike is a sure handy character to redeploy elsewhere.

Using Divination powers with a Furioso Librarian has some interesting possibilities. Sternguard has already been covered previously here with relevant info here.

On and on and on...You can find purpose for Elites units, but does this actually outweigh the benefits of having more fast attack and heavy support units when they can be scoring? There's a 16% chance for each of Heavy Support or Fast Attack being scoring units even if they are vehicles but not immobilized. There's a 33% chance that one of them will be picked, so you better have at least something from those slots. There's good reason to not load up too many points into your Elites section; however, there's no need to worry about going to the section to pull out something you want or need from it.

When list building for 6th, you should also keep an eye on the percentage of points you are dedicating to each slot. If it is swinging too far in one direction, come up with some creativity to keep you balanced and in the fight. It also means that you better keep your HQ and Elite slots relatively light and your troops survivable enough (one way or anther) to be effective.Your Fast Attack and Heavy Support are going to need to fill multiple roles (scoring, firing support, mobile melta, etc.) yet not lose effectiveness. Perhaps when going about list building, build your troops first, then heavies, fast attack and HQ, then elites last. If you are choosing Elites earlier, you may end up building around Terminators or Sternguard when this is not going to help you win the missions.

Please add your thoughts too in the comment section! 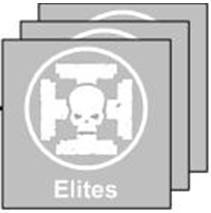 Thank you, everyone who has come by and visited to get Blood Angels material. I will continue to do my best to keep Blood Angels content coming to you. The bigger we can grow this blog, the more reach there will be to bring in the best ideas and content around the world on the Blood Angels that can be brought to you. 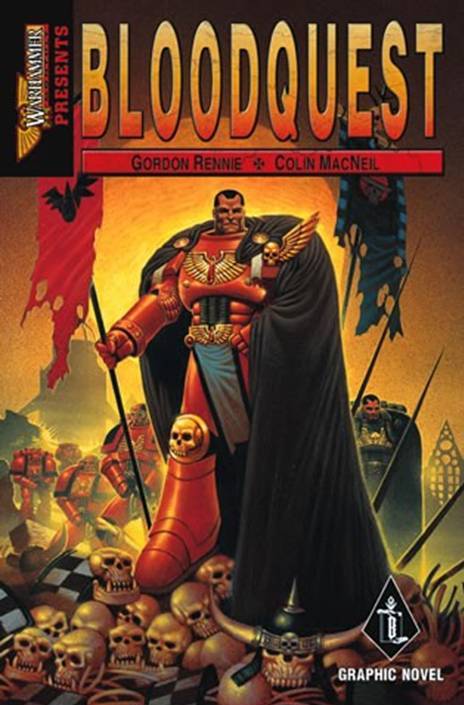 Special Thanks to everyone already following the blog:

Sixth edition has opened up various new ways to explore the game. Let's get into the rule book about Rivers, Lakes and Pools terrain (Rule Book p. 103) and how we can increase the amount of variety and best utilize terrain to help your Blood Angels.

BA jumpers are already behind when rivers, lakes and pools are automatically at least difficult terrain which means dangerous for jump pack marines. You might as well insist that you use the Mysterious River Table because you might be able to squeeze some benefit from it.

D6 Roll
1- no change
2- loss of warp charge points and no Deny the Witch rolls
3- add the Feel No Pain rule but need to pass a leadership test to move or shoot
4- dangerous terrain, vehicles immobilized is automatically wrecked
5- 5+ cover save, going to ground is a dangerous gambit
6- dangerous terrain, re-roll failed armour saves

Essentially, there is no downside to using Mysterious Rivers when using jumpers. Mechanized lists have really little to gain, though. Think about getting some river terrain into your games to balance out with the buildings and blast craters; it might turn the battle in your favor.

Jumpers treat difficult terrain as dangerous terrain (Rule Book p.47). You have to roll a 1 to trigger it though  (Rule Book p.90). Then you still get armour saves and a Feel No Pain roll too. Dangerous Terrain is far less risky now. Remember, your jumpers can also land on impassable terrain if they physically fit and they treat it as dangerous terrain (Rule Book p.47). This may come in very handy for Deep Striking and jumping onto unusual terrain features, etc. 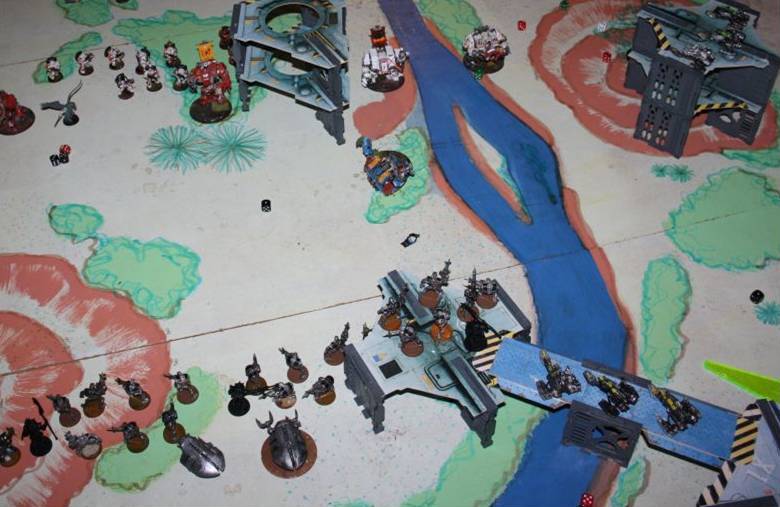 If anyone has great ideas or experiences, always add them in the comments to help Blood Angels players.
Posted by brent at 9:03 AM No comments: